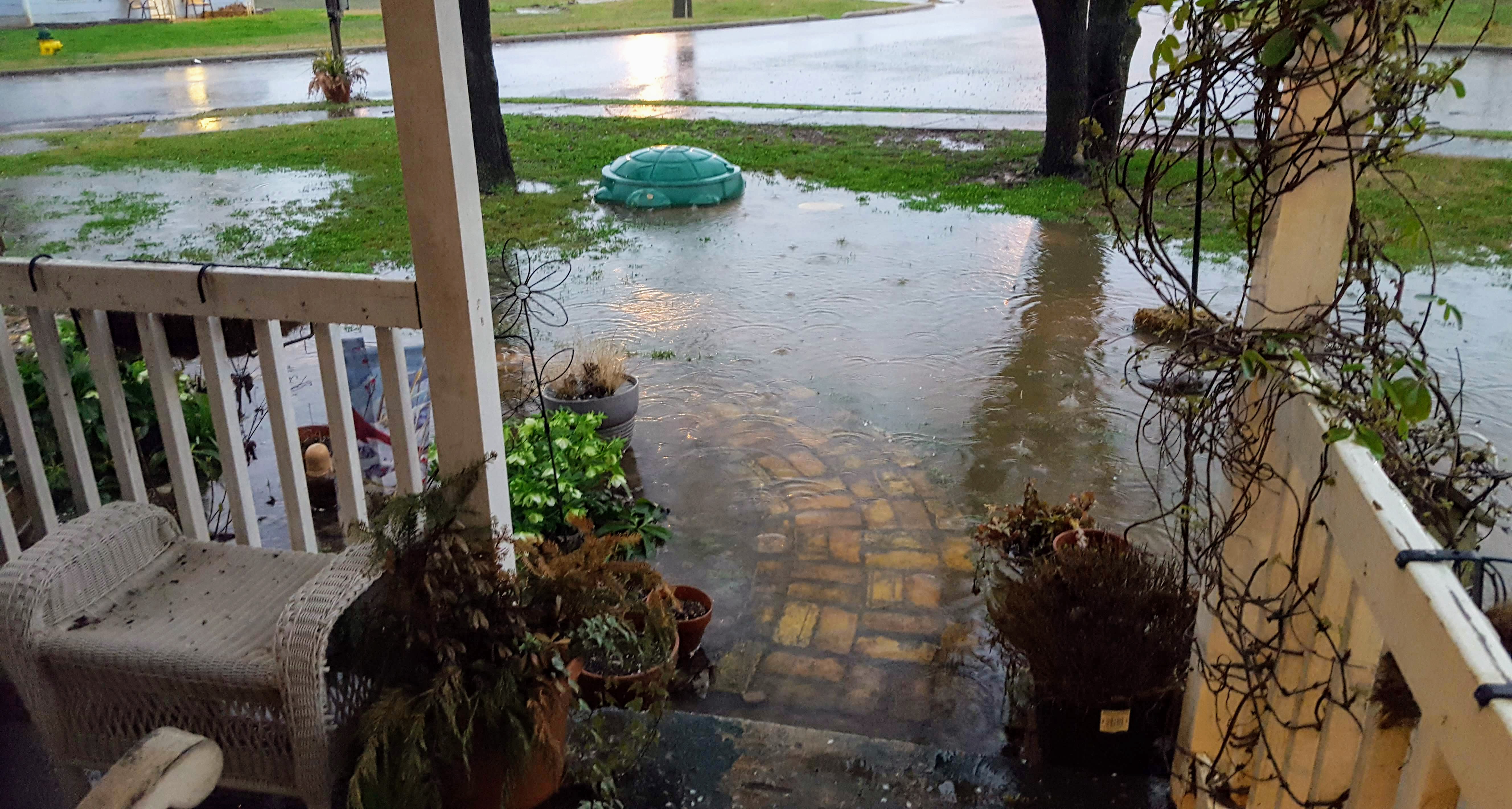 My front yard looked like a bowl full of water the other day.  I’m beginning to feel like Noah.

You always hear about how it rained for 40 days and 40 nights  but most fail to remember the rainy days represented only part of the time they spent floating around.

Turns out, Noah and his family actually extended their cruise for several more MONTHS !!  Yes.  That’s right.  Several more months.  In fact, Noah was 600 when he went into the big boat but would end up celebrating his 601st birthday while still ON the boat, a.k.a. the ark.

Let’s talk about sea-sickness …cabin/ark fever …smelly roommates …same-ole’/same-ole’ …getting on each other’s nerves …lack of variety in weather and scenery …frustrations …impatience …trapped …lost …not-so-sure you did the right thing …complaining attitudes …will this journey end? …Why?  …Where are you God? …stinky, indoor plumbing …and did I say, sea-sick? …and  let’s just say, the ultimate, “Are we there yet?” …

I’ve thought about this a lot lately because my husband and I are pretty sure it’s been raining in North Alabama for 3 months now.  I’m sure we’ve had a few sunny days in there somewhere but it sure feels like it’s been 3 months straight.

But back to the story of Noah …

“After 150 days,  exactly five months from the time the flood began, the boat came to rest on the mountains of Ararat.  Two and a half months later,  as the waters continued to go down, other mountain peaks became visible.”

“After another forty days, Noah opened the window he had made in the boat  and released a raven. The bird flew back and forth until the floodwaters on the earth had dried up.  He also released a dove to see if the water had receded and it could find dry ground.”

If my calculations are correct, it was at least 8 1/2 months before Noah opened the window to release the raven and the dove.  Since people hardly ever talk about that raven, let’s focus on the dove.  After all, the pictures in our mind are clearly the ones of the dove with an olive branch in its beak.  Who ever saw that raven? But I digress…

I wonder if it was Noah or his wife who cried out, “I can’t take it any longer!  We’ve  got to get  off this boat!”  Either way, Noah was ready to “test the waters” to see if there was a dry patch anywhere in sight.

He opened a window.  He sent up a flare in the form of a dove.

If it were ME …I would have been saying, “Please Lord!  Please give us a sign it’s time to get off this boat.  I’m done.  We’re all frustrated and tired and cranky.  I’m not sure I can hold it together any longer.  I mean, I’m thankful and all that we’re saved– but this cooped up feeling is getting to the best of us.  Please intervene.  Please help us.  Please fulfill your promise and now would really be great.  Waiting is getting harder and harder.”

And here’s little ol’ me again —  the blah winter months added to the rainy season have made me a little more than cranky and my attitude pretty stinky some days.  Attitude adjustments are just plain hard.  It’s like shifting a house on its foundation.   A simple tool in your toolbox won’t fix that!

But God opened a window for me.

The rain wasn’t completely off the radar yet but for a brief window of time, the clouds held their moisture to themselves and I could walk on semi-dry ground.

I grabbed my sneakers (tennis shoes to all us southerners) and went outside for a walk.  It was like the dove flying out of the window trying to find anything green or blooming.  No olive branches– but I did grab a few branches from our yard …

I’m telling you all this because I couldn’t help but think of all who are waiting for some answer to prayer or for relief from some painful situation but who feel like you’ve been floating on a boat out in the middle of nowhere for a very long time.

Or for those who were given a promise or who were rescued from destruction only to find yourself in a holding cell with stinky roommates and no land in sight  …this post is for you.

I know you may feel like somebody forgot about you and left you on a vacation cruise ship that went missing.  It may have been months — even years — since you started praying for that healing or salvation of a loved one or a promise to be fulfilled.

In Noah’s story, another 2  months would be added  before he and his family would finally be able to walk out of that ark that had saved their lives on to dry ground.

“But God remembered Noah …He sent a wind to blow across the earth, and the floodwaters began to recede.  The underground waters stopped flowing, and the torrential rains from the sky were stopped.”  (from Genesis 8 NLT)

God remembered Noah.  He never forgot him.  He was working all along to save Noah and his family and the other living creatures that would be needed to begin replenishing the earth– but the salvation that would last forever must have felt like forever in coming.

It’s okay to ask God to give you some sign of encouragement of that promise in the making.  You’re trusting Him that it’s growing out there somewhere even though it’s hard when you can’t see it.

But you may also know there’s peace in the answers you didn’t think you wanted.  Contentment in the “even if I never see the rainbow” moments.  Joy in the journey that never ends this side of heaven.

Noah and his family still had to make the plunge to do the radical thing.  Life as they had known it would never be the same.  New normals became THE normal.  Heartbreak and loss still accompanied them.

But God remembered them.  His love never failed.  He never abandoned them.  He met them where they were and restored life with a new beginning.

I just wanted to let you know it’s okay to open a window while you’re waiting.  Send out a dove and  see what God sends back to you.

Gather those branches.  They often end up making a beautiful bouquet.