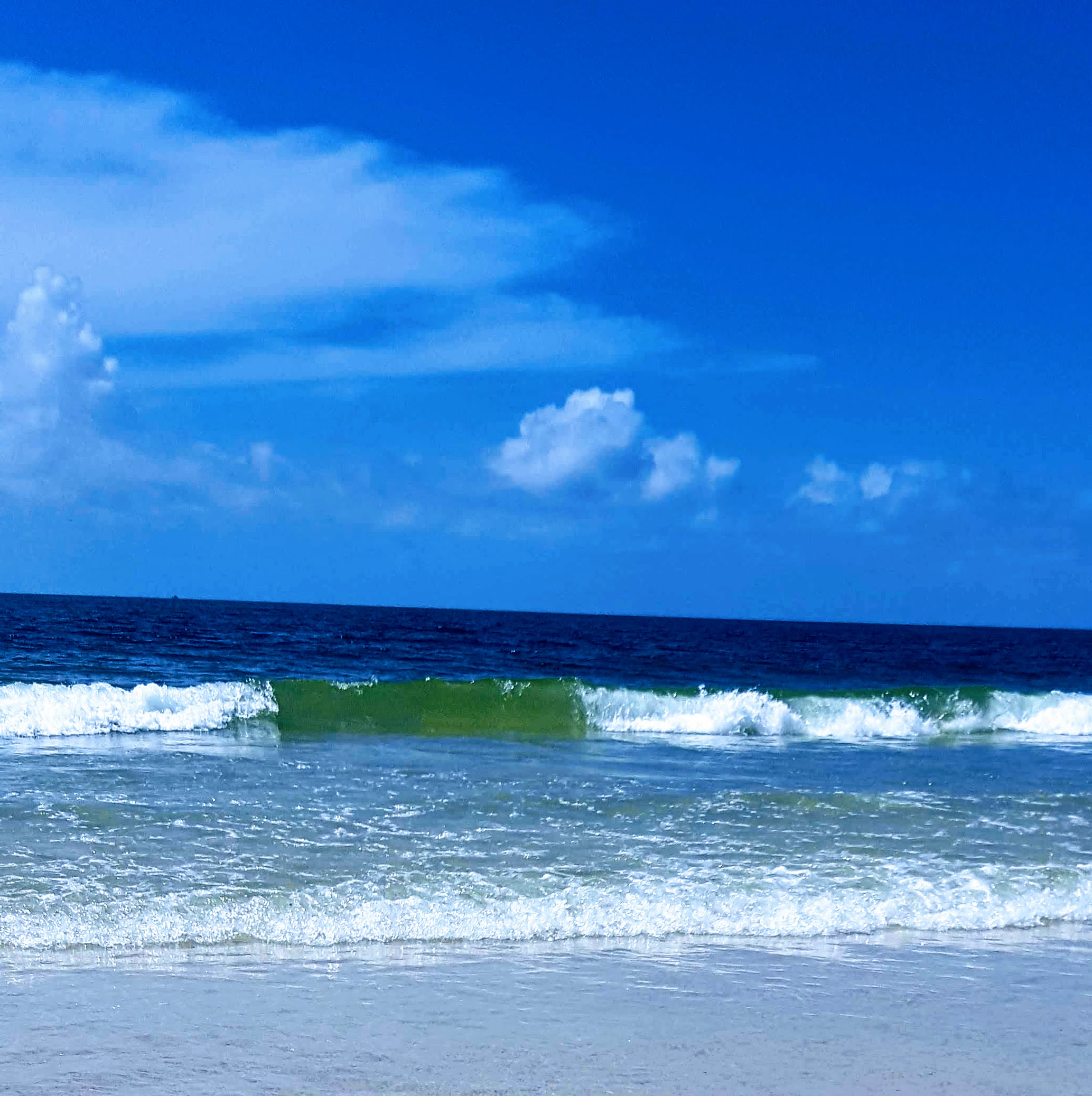 It was his first time to see the ocean. He’s five years old and has spent most of his life land-locked in northern Montana. Seeing his face when he first stepped on that sandy beach was like watching someone wake up after a long winter’s nap and realize they’re in a whole new world.

The excitement and thrill of finally getting in the ocean’s waves was almost too good to be true …until it was. You could see the facial expression move in its own waves from thrill to fear. He buried his little head in the closest belly of comfort, afraid to see what was coming and what it might do to him. He wanted someone bigger and stronger to keep him safe from what he didn’t want to face.

My own fearful heart understood but from that place of compassion I knew I had to tell him, “You can’t bury your head and not look. You have to watch the wave, Caleb.” I knew well what burying your head and not looking would do. Imaginations can flood the mind and conjure up a whale of a tale that’s bigger and hairier than reality ever could be.

Kids from 1 to 92 still find it hard to sleep at night and wonder if burying their head or ignoring a thing means it isn’t really there… yet they –we– see far scarier things in our minds that end up swelling into tidal waves of anxiety.

And from one fearful soul to another, words came to mind to give him tools to overcome and hopefully spare him some anxious waves ahead…

“Watch the wave, Caleb! It does the same thing every time. It rises up and curls, then crashes to the sand and levels out flat as it moves in to the shore.”

It’s as if I could sense the Creator of the waves looking at us both saying, “This is for you too, Nana.” When it rises, it’s sure to curl and crash …then level out and roll peacefully to the shore. It does the same thing …Every. Time. It was created to be that way. The laws of nature are always in motion.

The Holy Spirit washed over me in the middle of the waves of Gulf Shores with a calm and a peace and a renewed confidence to “Watch the waves.” They will most surely come but they always curl and crash and level back out to a calm flow to shore. It’s the natural rhythm of nature.

Jesus was honest with us. In this world we will have troubles. This, we can be sure of. He was also quite confident in saying we could take heart …He was greater than any wave of trouble and He would overcome.

And way before we were born, the Psalmist penned these words of hope…

But I almost didn’t want to publish this because I know many of you, like myself, have had a wave to crash over you that left a death of some kind in its wake. My heart aches for us.

Sometimes we watch as the breakers break our very soul to pieces like that of a young wife and mother who lost her husband way too early to a literal ocean wave. Children left to grieve and make sense of life without a daddy. A widow trying to grieve and give her children strength while trying to shut out the well-meaning words of others that only cut deeper into the gaping wound.

Stories from the news over the weekend bring another massive wave of emotions as we sort through devastating loss of life in the horrific shooting spree in El Paso, Texas, and Dayton, Ohio. Too much loss. Too little relief. Waves of anger all around– unbridled …senseless violence …hatred …bias …racism …mental anguish. Too much.

I know the “right” answers that “the Lord gives and takes away” and “I’ll praise Him in this storm” but the truth is, it hurts and the pain doesn’t ever really go away. I don’t fully understand God’s heart sometimes or why He allows such suffering leaving a deep hole that can never be filled.

I never want to trivialize our pain and sorrow but I do know this, I’ve anchored my soul in the depths of God’s love because there’s no other sure foundation. I may not understand or even like what happened or how life turned out but I know I can trust my Heavenly Father even in the “even if” times. I could try to cheer us on and say, “ride the waves … embrace the journey,” but that might sound cliche or Christian-ease to some. That’s okay. We’re struggling together.

But in these times, hope somehow gets stirred in with our suffering and we hold them both together in our hands until it overflows in comfort, wisdom and strength for another suffering soul.

I’m still watching the waves — knowing there will always be an ebb and flow to life. I guess I’m just more convinced than ever before that we need to keep gathering together and holding on to each other while the waves come and go. We have to keep sharing the stories and being real about our struggles — always giving space for those with doubts and questions and differences of belief or opinion.

It’s absolutely imperative that we enter into relationships and friendships with those who come from different backgrounds and cultures who may not look like us as we rest in the open arms of Jesus– the one who made us all and is always there to rescue us.